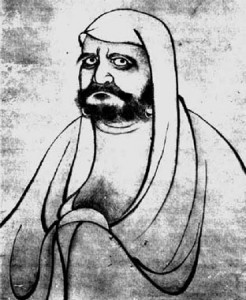 Many martial arts historians agree that the oriental martial arts started with a man s known as Bodhidharma (Daruma in Japanese). He came to China to re-ignite Buddhism. Bodhidharma arrived in Honan ( Hunan ) province at the Shaolin temple, only to find the monks practicing meditation, but in very weak physical condition. In an effort to help the other monks withstand many hours of meditation, he taught them breathing techniques and several exercises to increase their stamina and build strength.

It is believed that these same exercises, which were derived from imitating animals, are the source of the Shaolin ch’uan-fa (fist law) or Shaolin Temple Boxing. Using these exercises, the monks were able to develop their spiritual and physical strength. The monks of the Shaolin temple were known throughout China for their courage and fortitude. This temple is recognized by most martial artists as being the birthplace of gung-fu. And Bodhidharma is sometimes called Tamo or Da Mo, and is credited with originating gung-fu and karate. As these fighting skills became famous, they spread to nearby Fukien province, through tradesmen and merchants, and eventually to Okinawa.