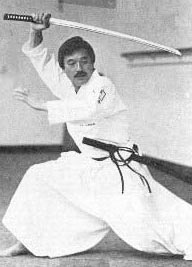 Shogo Kuniba was born near Mt. Fuji in Yamanashi-Shi, Japan, February 5, 1935 to a family descended from the Okinawan Sho Shi Royal family line. He began his martial arts training in 1940 at the age of five under his father, Kosei Kokuba, who in 1947 had become the Soke of Motobu-Ha Shito-Ryu. Shogo Kuniba, Sensei trained with many of the greatest teachers ever known to the martial arts, including Mabuni Kenwa, Sensei (Shito-Ryu), Shinken Taira, Sensei (Taira Kobudo), Nagamine Shoshin, Sensei (Shorin-Ryu), Itoh Asakichi, Sensei (Judo), Shioda Gozo, Sensei (Aikido) and many others. Mabuni Kenwa, Sensei ,the founder of Shito-Ryu Karate-do, came from Okinawa to live in Osaka around the time young Shogo Kuniba turned age ten. Mabuni, Sensei trained young Kuniba in Shito-ryu aided by Mabuni, Sensei’s old friend Kokuba Kosei, (young Kuniba’s father) who was also from Okinawa. When Shogo Kuniba was 12 he was promoted to Shodan by Mabuni, Sensei.
Shogo Kuniba also studied privately with other well known Sensei of many martial arts as his father’s home in Osaka, Japan was a familier meeting place for all martial artists. In 1943 Kokuba Kosei, Sensei founded the SEISHIN-KAN (Pure Heart Dojo) which was to become his son’s only legacy. After alot of interest this organization was later changed to SEISHIN-KAI ( Pure Heart Organization).

In 1950, Shogo Kuniba was promoted to Nidan, by Mabuni, Sensei. In 1952 he was promoted to Sandan by Mabuni, Sensei and began training in Mugai-ryu Iaido, the way of the sword, with Ishii Gogetsu, Soke at Sakai City. In 1955 Shogo Kuniba was promoted to Yondan, by Mabuni, Sensei and he began additional Karate training in Naha City, Okinawa, with Nagamine Shoshin, Sensei. While in Okinawa, Shogo Kuniba also studied Kobudo (weapons) with the infamous Taira Shinken, Sensei and Nakaima Kenko, Sensei. He learned the use of the “Bo” (staff 6′) and the “Nunchaku” (joined sticks) under Kosha Shojin, Sensei. With Yamaguchi Junko, Sensei he studied the “Tonfa” (spinning sticks). Shogo Kuniba, Soke was the first Karateka to demonstrate Okinawan Kobudo technique in Japan.
In 1956 Shogo Kuniba returned to his father’s homeland of Okinawa where he trained in the Shorin-ryu style of Nagamine Shojin, Sensei. In 1957, Shogo Kuniba published his first book on Karate, “Karate-Do Bin Ran”.
In 1958, he was promoted to the rank of Godan, in Motobu-ha Karate-do; Yondan in Iaido and Rokudan, in Kobudo. During this time Shogo Kuniba became the first office manager (Shodai Jimu Kyokucho) for the Nippon Karate-do Rengo-Kai (Federation of All Japan Karate-do Organizations, FAJKO). Shogo Kuniba was instrumental in the formation of this organization and in developing criteria used for ranking all Karateka and for helping to develop tournament rules for competition. Shogo Kuniba, Soke remained a special advisor to Rengo Kai until his passing away in 1992.
Upon his death on October 17 1959, Kosei Kokuba passed the leadership of Motobu-Ha Karate-Do on to his son Shogo Kuniba. This appointment was made “official” by the Shihan Board of Seishin-Kai that Shogo Kuniba would become the 3rd Soke for Motobu-ha and the first soke of Motobu-ha Shito-ryu which is his own creation from a blending of the styles which he was taught. At the age of 24, he became the youngest person to ever hold the title of “Soke” (The Family Head), for a Karate style, a distiction which remains true even today. Today in Japan there are only five, maybe six, elderly gentleman who hold the position of Soke and are ranked as such by the Zen Nippon Karate-Do Renmei (JFK).Upon becoming “Soke”, Kosho Kokuba had his Okinawan name changed to “Shogo” whose Japanese Kanji characters mean “strong warrior”. In Japan the Kanji characters for Kokuba, is pronounced as Kuniba.
In 1962, Kuniba, Soke was promoted by the Nippon Karate-do Rengo Kai, to the rank of Rokudan,(6th Dan), in Karate-do. He was also promoted to Rokudan, in Iaido, and Nanadan, (7th Dan) in Kobudo.
In 1964, Kuniba, Soke was featured in the encyclopedia Japonica in an article concerning Karate-do and Kobudo. In 1966, he was promoted by the Nippon Karate-do Rengo Kai, to the rank of Nanadan in Karate. In 1968, Shogo Kuniba, Soke became Seishin-Kai Kaicho (President), relieving Teruo Hayashi, Shihan.
In 1970, Shogo Kuniba, Soke was selected by the Nippon Karate-Do Rengo Kai, as the only representative of Japanese Karate-Do at the Second World War Karate-Do Championships Tournament held in Paris, France. Kuniba, Soke gave a demonstration at the tournament. In 1973, Shogo Kuniba, Soke was promoted to the rank of Hachidan, (8th Dan), in Karate-Do, Iaido, Kobudo and Goshin Budo. Goshin Budo is a combination of all the arts that Kuniba, Soke has trained in, for example, Karate-Do, Judo, Aikido and Jiu Jitsu.
In 1976, Kuniba, Soke appeared in the Japanese documentary movie “EIEN NARUBUDO” (Eternal Martial Arts). This film was shown on USA Cinemax TV in 1983, under the title, “BUDO: GREAT MASTERS OF THE MARTIAL ARTS”, and is available on video tape in most video stores under the title: “BUDO: GREAT MASTERS OF THE UNIVERSE”. In 1979, the Miami Film Festival Award went to “EIEN NARUBUDO” (Budo: Great Masters of the Universe), for the Best Documentary Film of 1978. In addition to Karate work, Kuniba, Soke was the first in Japan to choreograph fighting scenes at the famous Toei Stagio in Kyoto where the USA movie, “SHOGUN”, was filmed. For years, Kuniba, Soke was employed by Toei as a talent scout for actors for martial arts movies. Many of his students found their way into the movies. For example, Sonny Chiba, Hiroshi Miyauchi and Yasunori Kurata.
In 1983, Kuniba, Soke opened the USA Hombu Dojo in Portsmouth, Virginia, and made the USA his primary home and base of operations. from Portsmouth, Soke concentrated his efforts on teaching his style of Karate to the world and traveled to many other countries to do so.
In 1984, Shogo Kuniba, Soke was promoted to the rank of Kudan, (9th Dan) in Karate-Do and Goshin-Do by the Rengo-Kai. At that time he held the highest rank with the JKF of any Japanese martial artist living outside the country of Japan. In 1985 Kuniba, Soke was featured in Who’s Who in American Martial Arts, Founding Fathers of American Martial Arts and Shogo Kuniba: The Limitless Art of Goshin Budo.
After 1985, Shogo Kuniba, Soke was appointed to the technical committee for P.U.K.O., which is the part of W.U.K.O. that includes North, South and Central America. Each year after, he taught at clinics and gave demonstrations at Ozawa, Sensei’s Traditional Karate Tournament held in Las Vegas. Ozawa, Sensei’s Tournament may be the largest Karate tournament held inthe U.S.A.. Kuniba, Soke was featured in several magazine articles in the USA and also targeted in the French magazine, Karate. In Europe he was a member and technical advisor to the UNAAK, French Martial Arts Association.

On July 14, 1992 at approximately 2:05 a.m. Shogo Kuniba, Soke passed away after a long hard battle with stomach cancer. It is the only battle he ever lost! Soke Shogo Kuniba is missed greatly and remembered daily. Shogo Kuniba, Soke was awarded Judan, (10th Dan), posthumously by the Japan Karate Federation (JKF). He is one of only maybe 5 Karate-Ka, from Okinawa and Japan to receive this rank. Kuniba, Soke continued to train and develop new techniques until his passing away on July 14, 1992.