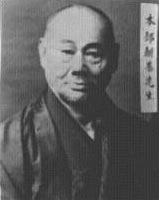 Master Choki Motobu was born in 1871 in Akahira village in the Shuri region of Okinawa, born the third son to the Motobu family. The Motobu family were skilled at the art of Ti (a grappling art of the Okinawan nobility). Motobu did learn some of the techniques of his family’s fighting system, but because of Okinawan tradition, only the first son, Choyu, was educated and choose to carry on the family’s martial tradition.
Choki Motobu, being frustrated by this, tried to sneak in and watch his older brother’s training. Master Motobu soon found that this was too slow and frustrating for him, so he began to lift heavy rocks and punch the punching post or Makiwara. After a while, he became so strong that he earned the name “Monkey King” because of his tremendous leaping ability and general agility.
In his youth, Master Motobu became known as a brawler and a troublemaker. Eventually, Master Motobu became the student of Ankoh Itosu. This added to difficulties about being accepted as a student of one of the foremost Masters in Okinawa. As a young man, Choki spent a lot of time seeking out strong looking men to challenge on the street. He won most of his fights and learned much from these encounters. Itosu sensei was not impressed by the young man’s bullying and promptly expelled him form the dojo. Master Motobu challenged many men in Japan. However, the defeat of a Russian boxer may have made him the most famous.

Motobu’s aggressive behaviour soon earned him a bad reputation and many sensei would not teach him. One man, however, liked the spirit he showed and accepted him as a student of karate. This man was Kosaku Matsumura of Tomari. It was from Matsumura that Choki learned many Kata. Master Motobu still challenged others to fights and was eager to develop and improve his fighting skills. He eventually asked Matsumura to teach him Kumite, but Matsumura told him to continue to learn on his own. Motobu, however, was persevering and is said to have watched the Kumite training through holes in the fence around Matsumura’s dojo.
During this time, Motobu gained great respect for his fighting ability. He was hailed as the greatest fighter in Japan. Many sensei advised their students to go and train with Motobu and learn his Kumite techniques. He was also asked to teach at several universities. Because of this, many of today’s great instructors of various styles had the benefit of his instruction.
Motobu usually only taught naihanchi Kata to his students and it was his own version with many Ti-like grappling and throwing techniques. However, it was his Kumite that had the greatest impact on karate. Oddly enough, there is a story of Choki, full of confidence, challenging his brother Choyu to a fight. It is said that Choyu threw Choki around like a rag doll. After the experience, Choki is said to have humbled himself and adopted more of his family’s Ti forms.
Later in life, Master Motobu seemed to stress the importance of tradition in training. He strongly stressed the importance of makiwara training and became as enthusiastic about Kata as he had always been about Kumite. In 1922, Master Motobu helped Master Funakoshi start the teaching of Karate to the Japanese.
In 1936, at the age of 65, Motobu left Tokyo and went back to Okinawa to visit his instructors to talk about the state of karate in Japan and to make sure that he was teaching the Kata and techniques in their originally, unaltered form. Subsequently, he returned and continued teaching in Tokyo. Shortly before World War II, he returned to Okinawa and died in September of 1944 of a stomach disease at the age of 73.
Motobu-Ha Shito-Ryu literally means Shito-Ryu of Motobu. Master Choki Motobu lived from 1871 to 1944 and trained many-noted Masters; among them are Shoshin Nagamine, Tatsuo Shimabuku, and Kosei Kuniba of the Seishin-Kai Karate dojo in Osaka, Japan. The Seishin-Kai Karate dojo named the Karate that it taught there, Motobu-Ha Shito-Ryu, in honour of Master Motobu. The headquarters of Motobu-Ha Shito-Ryu Karate is the Seishin-Kai, in Osaka, Japan.